Back in June, when we published our Slack S-1 Review on the eve of the company’s direct listing, the average Price-to-Sales (P/S) multiple for our Software-as-a-Service (SaaS) company comparables set was approximately 23x. Since Slack’s debut, economic headwinds have intensified, namely tariff blows between China and the U.S. and indicators of a global slowdown. As such, we updated our SaaS comparables and also added to our set customer experience management company Medallia, which went public shortly after Slack. See below for our update: 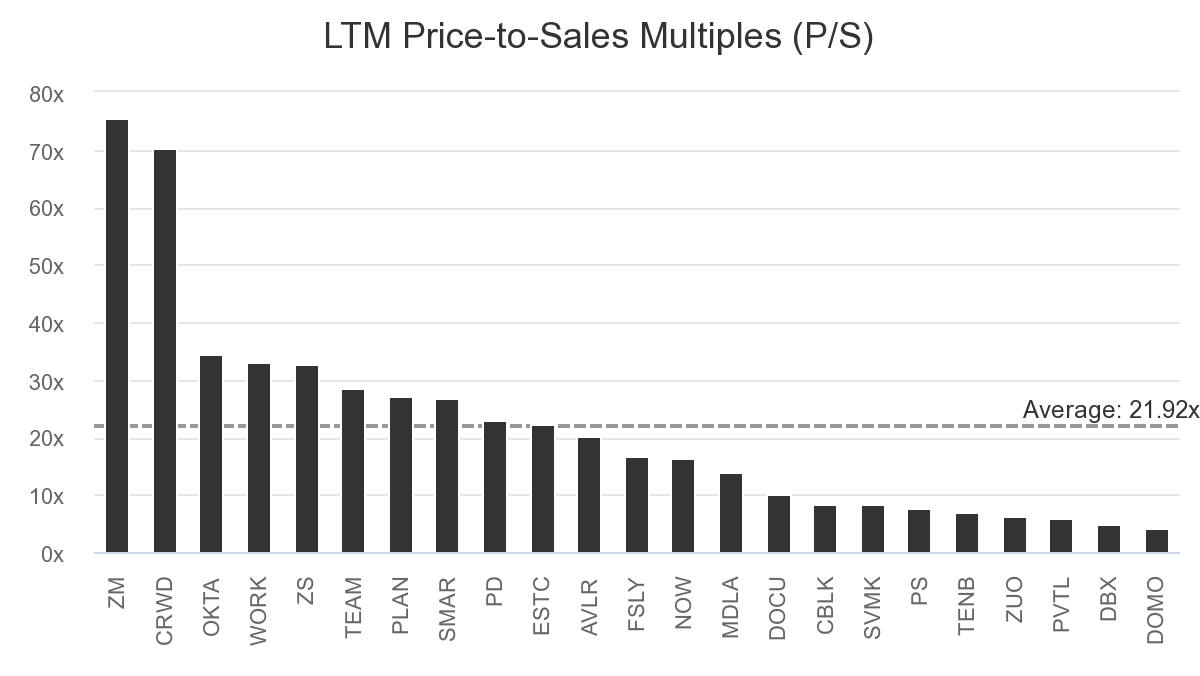 Not much. Given recent market volatility, it’s no surprise that SaaS multiples across our comparables set of 23 companies have contracted a bit, but perhaps not as much as one would think. The average P/S multiple has fallen by one turn of revenue to just under 22x from 23x back in June. As before, Zoom Video and CrowdStrike lead the pack by a significant margin, trading at 75.3x and 70.4x, respectively, compared to 82.3x and 61.0x a couple months ago. Beyond these two companies, the usual suspects—Slack, Okta, Zscaler, Atlassian—continue to trade at high multiples, with the average P/S multiple among these four companies contracting only slightly from 33.7x to 32.2x. Towards the bottom, companies like Domo, Pivotal, Dropbox and Zuora continue to trade below double digits and well below the average.

The biggest winner has been cybersecurity company CrowdStrike, which is trading over 9x its LTM revenue higher than back in June. Other companies in the cyber security and identity and access management space, like Okta and CarbonBlock, are both trading higher than earlier this summer, implying that cyber security companies are viewed as acyclical as their clients will prioritize security regardless of economic conditions.

The biggest losers of the last two months are IT management company PagerDuty and EdTech company Pluralsight, which are trading 12.0x and nearly 10.0x, respectively, lower than before. PagerDuty has steadily declined after reporting its most recent earnings, while Pluralsight fell rapidly towards the end of July after issuing third-quarter guidance that was below Wall Street estimates.

Not really. Aside from a handful of companies, including Zoom, CrowdStrike, PagerDuty, Pluralsight and Fastly, the remainder of our SaaS comparables set is trading within a few multiples of revenue from where these companies were in June. In fact, the average company’s P/S multiple has fallen by just 0.8x LTM revenue. Overall, SaaS multiples remain at historical highs, despite increased anxiety over the global economic outlook. We’ll be monitoring the markets and will provide you with another SaaS update as we head into the fourth quarter.