A Co-Working Comparison: WeWork vs. IWG

When The We Company (formerly known as WeWork) filed its mandatory IPO paperwork last week, at least a part of us was hoping that the company’s disclosures would help rationalize its $47 billion private valuation. Instead, WeWork’s S-1 filing only helped to further reinforce what most of us already knew about the company: (1) rapid revenue expansion, (2) equally quick growth in losses, and (3) no path to profitability in sight. Moreover, I’m not sure the company’s disclosures did much to alter our understanding of WeWork’s status as a “tech company”—namely, that WeWork remains “not a tech company” but rather a co-working business with a serious maturity mismatch between its long-term lease obligations and short-term sub-leases.

It’s possible that WeWork will someday become a very successful co-working business and will exceed the scale and profitability of its closest public competitor, IWG plc. We could try to forecast when WeWork’s elusive profitability might become a reality, but that seems pretty absurd given the company’s losses exceed its revenue and also this excerpt from WeWork’s S-1 filing:

The timing at which we [WeWork] may achieve profitability depends on a variety of factors, including economic and competitive conditions in the markets where we operate and seek to expand, the pace at which we choose to grow and our ability to add new products and services to our platform.

Now, that doesn’t sound too comforting if I’m a WeWork investor. In any event, in an effort to understand where this company might end up trading once it goes public, we’ve prepared a side-by-side comparison of IWG and The We Company. At their core, these two companies are comparable along a number of metrics, which we dive into below: 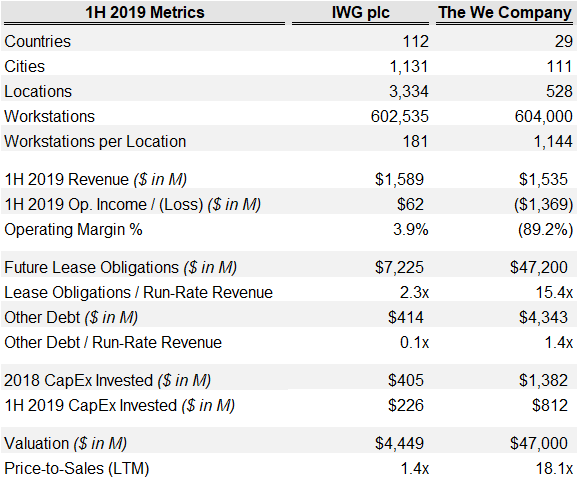 A fulsome comparison of WeWork and IWG is beyond the scope of this article. Nevertheless, by comparing a few metrics from each company, it’s clear that WeWork and IWG are at very different stages of maturity and have pursued starkly different growth strategies.

WeWork may be the stronger brand with greater name recognition, but IWG’s global footprint greatly exceeds that of its VC-backed competitor. With over three thousand locations, IWG has a presence in 112 countries and over one thousand cities. This compares to WeWork’s presence of 528 locations in only 111 cities in 29 countries. That being said, each of WeWork’s locations generates considerably more revenue than IWG’s—in the first half of 2019, WeWork brought in about $1.5 billion in revenue across its 528 locations, or approximately $2.8 million per location. In contrast, IWG’s roughly $1.6 billion in revenue translated to only $477 thousand per location in the first six months of 2019.

To WeWork’s credit, it has been able to generate significantly more revenue per location by fitting in nearly one thousand more workstations in each of its locations than IWG. With 1,144 workstations per location in 1H 2019, compared to IWG’s 181, this metric supports WeWork’s narrative that it leverages sophisticated technology to optimize its buildouts and floor planning to a greater degree than its competition. WeWork also impressively grew 1H 2019 revenue by over 100% year-over-year, compared to only 12% for IWG.

With its breath-taking topline growth, WeWork has also assumed a drastically different capital structure than its competitor, assuming over $47 billion in future lease obligations. This compares to IWG’s future lease liability of only $7.2 billion as of 1H 2019. WeWork is of course growing much faster than IWG, but its current lease obligation-to-revenue multiple is over 15x compared to 2.3x for IWG. If WeWork were to match IWG’s multiple today, it would have to be on pace to generate almost $21 billion of revenue in 2019, or over 8x WeWork’s last-twelve-months’ (LTM) revenue.

We can expect WeWork’s lease obligations to continue to grow as the company expands, and whether it’s able to right-size its lease obligations towards IWG in the future will be of paramount importance to investors concerned with the cyclicality of the co-working industry. Moreover, WeWork will have at least $3 billion of additional debt once it completes its IPO and debt financing next month, with the option to draw $3 billion more in the future.

Regardless of how WeWork compares to IWG, the former has managed to attain a $47 billion valuation with the backing of some of the venture world’s most prominent investors, including Benchmark, Goldman Sachs and of course the SoftBank Vision Fund. At $47 billion, SoftBank most recently invested primary capital into WeWork at 26x revenue (18x on an LTM basis), a multiple that we’re much more used to seeing for fast-growing enterprise SaaS companies, not extremely capital-intensive real estate services businesses with highly levered capital structures. Due to the lease leverage that co-working companies assume, it’s no surprise that IWG trades at approximately 1.4x its LTM revenue (and it’s profitable).

In order to explain away this valuation discrepancy, WeWork has constructed a narrative of itself as a tech-powered real estate business, which leverages both hardware and software to lower buildout and operating costs, ultimately allowing for more flexible and affordable “Space-as-a-Service” solutions for its clients. Admittedly, while the narrative is attractive, WeWork’s S-1 filing did little to illuminate that the company is succeeding in transforming itself into a tech company. Providing metrics, like the individual workstation revenue information we discuss above, may actually support WeWork’s thesis.

However, right now, WeWork is unable to even demonstrate that it can become profitable in a largely traditional, low-tech industry like co-working. The threshold question for us at EquityZen is—can WeWork’s technology propel significant operating leverage in the co-working industry such that it’s deserving of such a large valuation premium? With only 10% of WeWork’s current locations defined as “mature” by the company, we think the answer to that question is far too uncertain and distant for WeWork to merit a 26x revenue multiple. We’ll be sitting this IPO out.