Access to private company investments has been dominated by VC firms.

EquityZen is here to change that.

Here's how it works.

Shareholders submit their shares to EquityZen. We conduct due diligence, and place the shares in an investment vehicle.

We open up the offering live to investors who purchase an interest in the investment vehicle.

If the company gets acquired or goes public, shares or cash are distributed to investors.

The average time for US tech companies to go public has risen from 4 years in 1999 to 10+ years today.

This means that access to early stage technology companies has disappeared from the public market. The average US tech company is worth $1B by the time of the IPO!

Investors are missing out.

Six companies between 2004 and 2015 went public with $10 billion valuations. Even more have gone public since!

The bottom line is that the public markets are losing IPO candidates as promising companies choose to stay private longer.

As a result, more value is taking place in the private market. 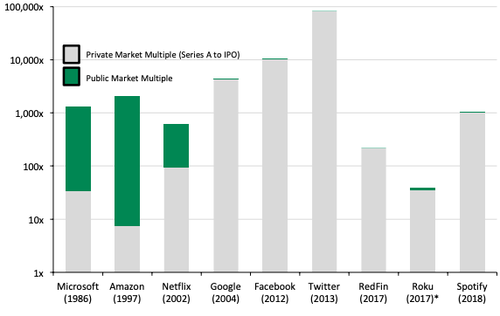 Source: EquityZen, March 2019. The graph displays how value creation from 1986 through 2019 has shifted from the public markets (green) to the private markets (gray). Roku's private valuation multiple based on Series B to IPO.

We never sell your private and financial information. Ever.

The Private Market is Calling.