Weekly Update #302: Update | The Funding Tap Is Running for Autonomous Vehicle Startups, but When Will the Technology Be Ready for Mass Public Rollout?

Our full-length report on Uber's S-1 is here. Head over to our Uber IPO Center to see EquityZen's thoughts on Uber!

Chart of the Week – Update | The Funding Tap Is Running for Autonomous Vehicle Startups, but When Will the Technology Be Ready for Mass Public Rollout? 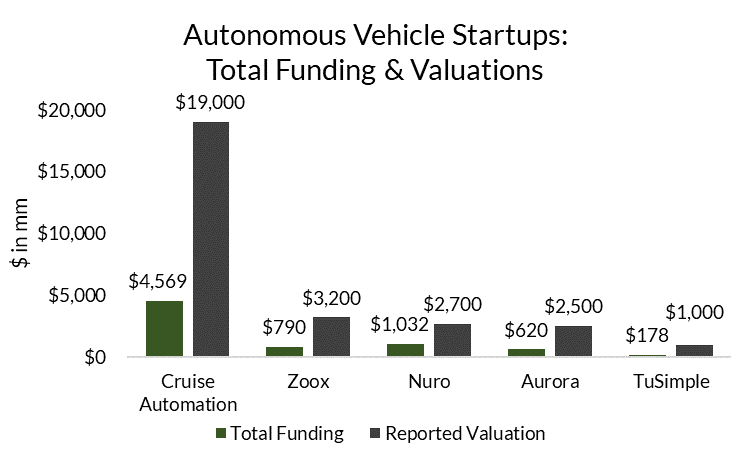 Smart vehicles have long been a science fiction staple (see “Sally,” first published in 1953), and readers have wondered for decades how AIs and humans might co-exist in the distant future. Within the last few years, that reality seems to be approaching as large companies like Tesla and Alphabet’s Waymo pave the way for driverless cars. In parallel, startup funding has proliferated the number of self-driving car companies seeking to bring autonomous cars to the masses. At the beginning of February, Amazon (NASDAQ:AMZN) led a $530 million investment round in Aurora Innovation. Nuro, a self-driving vehicle startup for local goods transportation, announced a $940 million Series B round led by the SoftBank Vision Fund only a few days later. In the same month, TuSimple, a U.S.-Chinese tech startup seeking to commercialize self-driving for long-haul semi-trucks, raised a further $95 million. Finally, Cruise Automation, General Motor’s inhouse driverless car unit, received a staggering $1.15 billion from the SoftBank Vision Fund this year.

The above companies, though, aren’t the only ones that have skin in the autonomous vehicle game. With the recent IPO mania around Uber and Lyft, investors have renewed interest in driverless cars, especially as both companies have stated that autonomous technology is key to their long-term strategies. Lyft disclosed in its S-1 filing that it has a partnership with Aptiv and is heavily investing in a Level 5 Engineering Center. Uber has echoed the same sentiments and recently received $1 billion in capital for its Advanced Technologies Group, which will be used to accelerate the development and commercialization of automated ridesharing services. Both companies are racing to roll out robo-taxis that would revolutionize the ridesharing industry.