Weekly Update #291: The Funding Tap Is Running for Autonomous Vehicle Startups, but When Will the Technology Be Ready for Mass Public Rollout?

Chart of the Week – The Funding Tap Is Running for Autonomous Vehicle Startups, but When Will the Technology Be Ready for Mass Public Rollout? 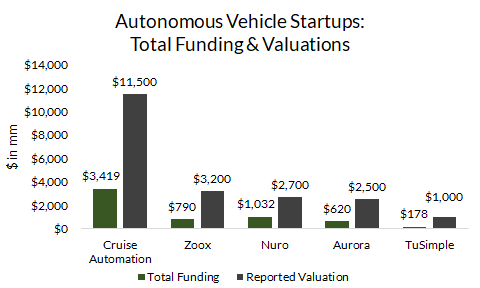 Smart vehicles have long been a science fiction staple (see “Sally,” first published in 1953), and readers have wondered for decades how AIs and humans might co-exist in the distant future. Within the last few years, that reality seems to be approaching as large companies like Tesla and Alphabet’s Waymo pave the way for driverless cars. In parallel, startup funding has proliferated the number of self-driving car companies seeking to bring autonomous cars to the masses. At the beginning of February, Amazon (NASDAQ:AMZN) led a $530 million investment round in Aurora Innovation. Nuro, a self-driving vehicle startup for local goods transportation, announced a $940 million Series B round led by the SoftBank Vision Fund only a few days later. Just last week, TuSimple, a U.S.-Chinese tech startup seeking to commercialize self-driving for long-haul semi-trucks, raised a further $95 million. Finally, Cruise Automation, General Motor’s inhouse driverless car unit, received a staggering $2.25 billion from the SoftBank Vision Fund last year.

Driverless car technology is currently being testing in limited trials, mostly within California and Arizona. The commonly-used proxy for progress for this technology has been the number of miles autonomous vehicles have logged; as these vehicles log more miles, the artificial intelligence and machine learning software is trained to better handle various driving situations (see Waymo’s post about reaching 10 million miles). California requires startups that have autonomous vehicle permits to report the number of miles and times autonomous vehicles have disengaged their software from human intervention. Cruise logged 447,621 miles in 2018, a 245% increase from 2017, and 86 disengagements, a 18% decrease. Aurora logged 63,512 miles by November 2018, a 448% increase over 2017, and 279 disengagements since August 2017. A full list of companies and their disengagement reports can be found here.

Want to learn more about SoftBank? Check out EquityZen’s SoftBank Report. If you’re curious about the artificial intelligence and machine learning technology behind driverless cars, check out our Artificial Intelligence Overview.