This week’s content is brought to you by the Risun Udawatta and Adam Augusiak-Boro.

Chart of the Week – Amid Climate Change Alarm Bells, Where is GreenTech Today? 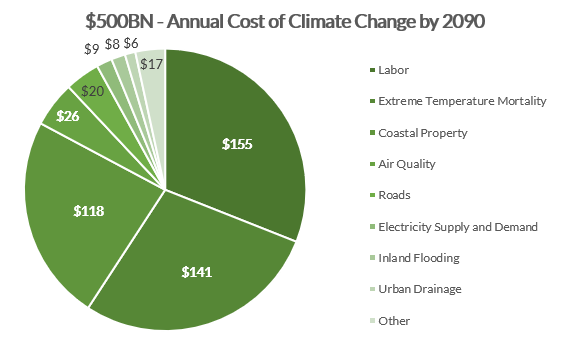 The alarm bells are ringing, according to environmental scientists and the U.S. government. Over the past year, evidence continued to mount on the devastating effects of climate change on the planet (for example, see the tragic wildfires in California among countless other climate catastrophes). 2019 isn’t off to a better start, with scientists recently reporting that oceans are heating up “40% faster on average than a United Nations panel estimated five years ago.” A report by the U.S. government called the “Fourth National Climate Assessment,” expounds on the economic costs of climate change in the U.S., which it estimates will reach $500 billion annually by 2090, or about 2.5% of the U.S. GDP at the end of 2017. With more human and economic devastation on its way, where do we go from here?

Many carbon-cutting energy sources have been available for decades—namely,  solar, geothermal and wind—so we wanted dive into some of the cutting-edge green technologies being funded today that complement and build on the green energy mix. While we hear daily about newly-minted unicorns snagging hundreds of millions of dollars to fix societal inefficiencies and pain points, including last mile logistics, cloud computing and co-working solutions, among others, we rarely hear about environmentally-focused startups in the same vein.

We decided to explore startups focused on mitigating the effects of climate change. Below are some companies whose technologies are solving for a variety of carbon-capturing or -cutting solutions:

Carbon capture, as the name implies, is the technology used to capture CO2 emissions produced from the use of fossil fuels as well as the transportation and storage of CO2. In October 2018, the United Nations scientific panel concluded that carbon capture was critical in keeping global temperatures below levels that would significantly impact the well-being of the planet.  As many have noted, however, the cost of the technology has so far prevented the large-scale rollout of the technology. Carbon Engineering and other startups hope to change this.

Other startups like Freight Farms are looking to more efficiently farm produce and in areas that cannot support farming. These startups are advancing hydroponics and higher productivity methods as climate change shifts suitable farmable land. While the Fourth National Climate Assessment caveats that “distribution of vegetation and land cover is highly complex, driven not only by changes in climate, but also land use-changes, [and] shifts in disturbance regimes,” among other things, the Assessment notes that climate change has “the potential to adversely impact agricultural productivity at local, regional and continental scales.” Startups are seeking to counteract land degradation by providing ways to increase agricultural productivity, reduce land clearing for production and thereby reduce CO2 emissions.

Green tech startups unfortunately do not garner the same attention as the likes of Uber, Airbnb or Lime as has been made evident in startup funding patterns. According to Crunchbase data, U.S.-based environmentally-focused startups have raised a median of three rounds, with a last round median of $11 million and a total equity financing median of $25 million. This compares to median deal sizes for expansion and later stages of $20 million and $37.5 million, respectively, in Q4 2018 (Venture Capital Funding Report 2018).