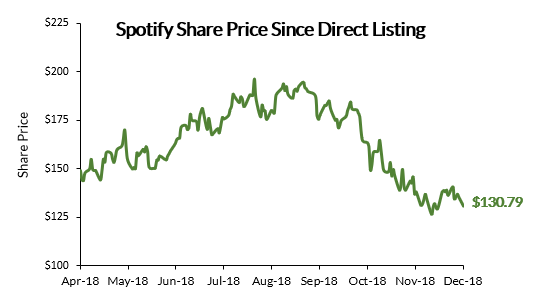 Spotify (NYSE:SPOT) has successfully found a home in the public markets. In the eight months since Spotify listed its shares on the New York Stock Exchange (NYSE), the Company has seen its share price rise to a high of $196.28 and has recently settled at $130.79 as of 12/10/2018. It didn’t suffer the woes that have plagued some startups, where lackluster demand or missed operating metrics caused the share price to fall well below the IPO price within a few months of going public. By most accounts, Spotify has proven itself in the public markets, generally meeting and in some cases exceeding its quarterly guidance. We believe the recent share price decline can be largely attributed to the overall market declines stemming from trade war anxiety and decelerating growth at some of the tech giants. What is unique about Spotify’s public run, however, is that it didn’t pursue a traditional IPO. Instead of relying on a group of underwriters to sell shares to institutional investors, it listed its shares directly on the NYSE. Heading into 2019, other potential IPO candidates have taken note of Spotify’s experiment and may seek to replicate its direct listing.

Before jumping into 2019, let’s delve into what exactly consists of a traditional IPO and a direct listing. In a traditional IPO, a company is listing primary shares in order to raise new capital for a variety of corporate purposes. A company hires an underwriter in order to market its shares to institutional investors through a road show, which are presentations used to inform potential investors of what the company does and help the underwriter gauge investor interest. Ultimately a share price is set by the underwriter after collecting indications of interest from institutional investors. Once the company debuts its shares publicly, the underwriter will engage in price stabilization efforts, buying and selling shares on the market in order to prop up or depress the share price. The goal is to make sure the share price stays within a relatively reasonable bandwidth of the IPO price.

A direct listing or direct public offering (DPO) is where a business lists its outstanding shares directly on a stock exchange without the help of intermediaries or underwriters and without a primary or secondary underwritten offering. A DPO lacks lock-up agreements and price stabilization activities. In other words, insiders are not required to hold shares of the company for six months post-IPO and an underwriter will not commit to buying and then selling the company’s shares at a certain price, thereby locking in a funding amount.

Spotify chose a direct listing for five main reasons, but we believe two reasons were the driving force: 1) Spotify didn’t require additional capital as it was cash flow positive, and 2) it wanted instant liquidity for all shareholders.  For a complete overview of Spotify’s direct listing, check out its investor day page. Today, many tech startups are going public after raising hundreds of millions in private capital, realizing that many investors finally want to exit and realize their returns and as a way of securing additional capital (as most newly-public companies remain cash flow negative). However, Spotify had the luxury of being cash flow positive, and thus did not need guaranteed capital in an IPO. Spotify was also clear that it wanted to provide immediate liquidity to its shareholders. By directly listing, existing shareholders – insiders, founders, and venture capitalists – were able to trade their shares on day one. In contrast, a traditional IPO would require insiders to wait until their lock-up period, usually six months, has expired to sell their shares. In that lock-up period, a lot can impact a newly public company, driving share price down – just look at Snap, Zynga or Vonage.

Spotify has shown the world that direct listings are a viable option for startups.  It is rumored that even Airbnb and Slack are considering a direct listing rather than a traditional underwritten IPO in 2019. A direct listing for Airbnb could makes sense, as it fits the Spotify profile – a cash flow positive startup with broad market appeal and a more easily understood business model. On the other hand, it is unknown whether Slack is profitable, and the company arguably does not have the same brand awareness as Airbnb or Spotify. While Slack is well known throughout the tech industry for its chat and collaboration tools, Slack likely doesn’t have the same name recognition among retail investors. In any event, blockbuster direct listings from either Airbnb or Slack may show that this strategy is here to stay, and investment banks should consider the impact of those lost future fees.