Weekly Update #277: Despite Raising Over $2B in Capital, Digital Media Darlings Sputter

Chart of the Week – Despite Raising Over $2B in Capital, Digital Media Darlings Sputter 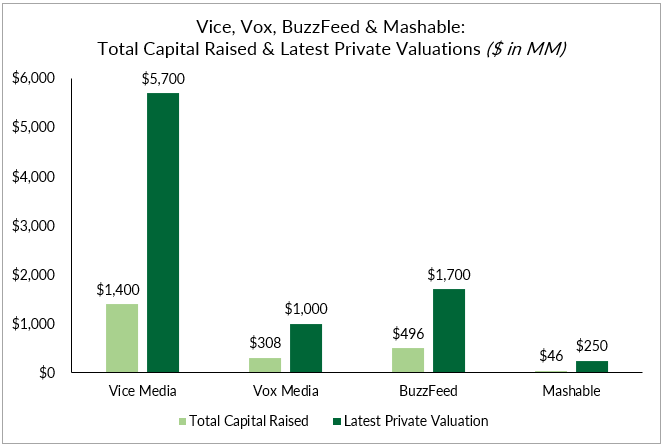 Digital media companies like Vice Media, Vox Media and BuzzFeed wowed investors with their large, young audiences and original content generation.  These three companies plus digital publisher Mashable, which sold to Ziff Davis in 2017, have cumulatively raised over $2 billion since inception.  Vice Media, one of the most closely watched digital media companies, was able to raise $1.4 billion from notable strategic investors including The Walt Disney Company, A+E Networks and 21st Century Fox.  Similarly, Vox Media and BuzzFeed raised approximately $300 million and $500 million, respectively, from media giants like NBCUniversal and seasoned venture capital investors including Andreessen Horowitz, Khosla Ventures and General Atlantic.  While raising hundreds of millions of dollars, these companies also attained billion dollar plus valuations, with Vice Media reaching a valuation of $5.7 billion.  Before its sale, even Mashable was reportedly valued at $250 million after raising money from Turner Broadcasting and Time Warner Investments.

However, Mashable’s heavily discounted price tag of $50 million in its sale to Ziff Davis was a sign of things to come.  In general, digital media companies have stagnated if not struggled throughout the last year or two.  Vice Media notably missed its 2017 revenue targets by $100 million and is reportedly shedding 10% to 15% of its workforce as it’s on track to miss 2018 revenue goals as well.  Vox Media similarly is expected to miss its revenue target by over 15% after laying off approximately 50 employees (or 5% of its workforce) earlier this year.  BuzzFeed has not been immune to the digital media woes either, after reportedly missing its revenue target for 2017 amid a business restructuring that has led to over 100 layoffs.

What explains the swift downturn among the digital media darlings?  We dig into some potential reasons below:

With streaming services on the rise and the Google-Facebook digital advertising duopoly set to continue, these digital media companies may continue to struggle for the foreseeable future.