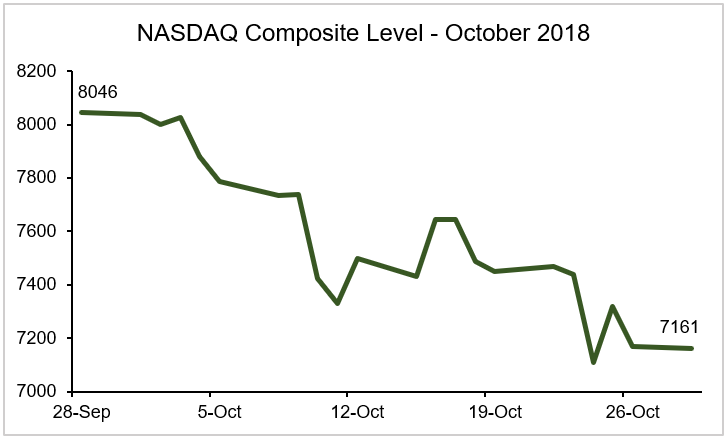 In our newsletter from last week, we discussed the relatively solid 2018 IPO market, which has seen 176 IPOs price through today, as well as some of the potential blockbuster IPOs coming up in 2019, like Uber, Lyft and Palantir.  Only a few days later, however, and it looks like the public equities markets, in particular tech stocks, have fallen off a cliff and are putting 2019 IPO activity into question if this really is the beginning of a longer-term downward trend. In October so far, the NASDAQ Composite, which is heavily weighted towards technology, has dropped nearly 900 points since the beginning of the month.  The nearly 900 point or 11% drop marks the NASDAQ’s worst monthly performance since November 2008, only a couple months after the collapse of Lehman Bros.

Leading the downward charge are unsurprisingly some of the FAANG stocks (Facebook, Apple, Amazon, Netflix and Alphabet’s Google).  Netflix has fallen 14% since reporting earnings in mid-October, despite handily exceeding analysts' expectations.  Amazon and Alphabet also suffered heavy losses at the end of last week after both companies reported beating earnings but missing revenue estimates.  Apple and Facebook are set to release earnings later this week, potentially adding more pain to big tech’s recent market performance.  However, strong reports from both companies may not spare them from the market turmoil, with even Netflix succumbing despite beating earnings estimates by over 20 cents.

While Amazon and Alphabet results may have been somewhat disappointing, they don’t fully explain what’s driving this market correction, which is defined as a price decline of at least 10%.  Additional factors weighing on investor confidence include:

The tech industry, which propelled U.S. stock indices to record highs in 2018, undoubtedly faces some challenges as we head into 2019.  All of a sudden, highly anticipated IPOs for Uber, Lyft, and Palantir, among others, seem more precarious.  While we’re not convinced that this is necessarily the beginning of a sustained down market, we think recent market volatility may push a few companies that were entertaining an IPO in 2019 back onto the sidelines.  For companies that gave clear messages that they intend to IPO next year, such as Uber and Lyft, we believe they’ll continue to march ahead but probably with greater speed now that the bull market’s run appears shakier.