Dropbox filed an S-1 last week, becoming the second tech unicorn to seek a public listing this year (Zscaler filed the week before). The company, which provides cloud storage solutions for consumers and enterprises, aims to list on the NASDAQ under the ticker “DBX”.

We believe Dropbox may be heading for an IPO “down round”. Our estimated fair value range for the company is $5.3-8.3B, which is based on a forward revenue estimate of $1.3-1.4B and P/S comps of 4.0-6.0x. Our valuation estimate compares to the $10.3B implied valuation Dropbox’s last funding round. The potential re-rating is not entirely surprising -- the company last raised in 2014, a frothy year for VC financing. Several other tech firms that also obtained funding that year have experienced step downs in valuation upon their public debut. We talk more about IPO down rounds here. 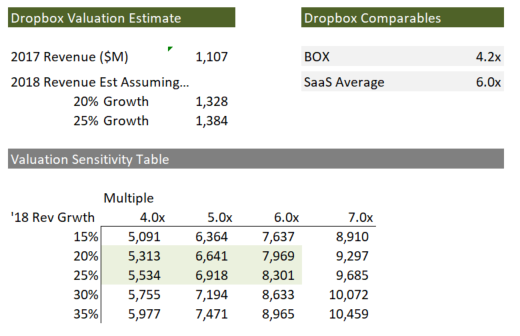 Some quick takeaways from the filing:

Other items we are reading this week: