Can Peloton Buck the Hardware Trend and Succeed as a Public Company?

Peloton, the tech-enabled fitness company (or media, interactive software, product design, social connection, etc., etc., company), was supposed to be one of the few VC-backed unicorns to go public with actual profits. However, when Peloton co-founder and CEO John Foley said that his company was “weirdly profitable” in a CNBC interview last year, it seems “weirdly” actually meant not really profitable at all. Last week, Peloton’s Form S-1 filing revealed that, while the company grew revenue over 110% in FY 2019, it generated losses of nearly $200M on $915M of revenue. Despite the miscommunication on the company’s profitability, Peloton will be heading to the public markets this fall, and investors are undoubtedly wondering whether Peloton will debut higher than its last private valuation of approximately $4B. 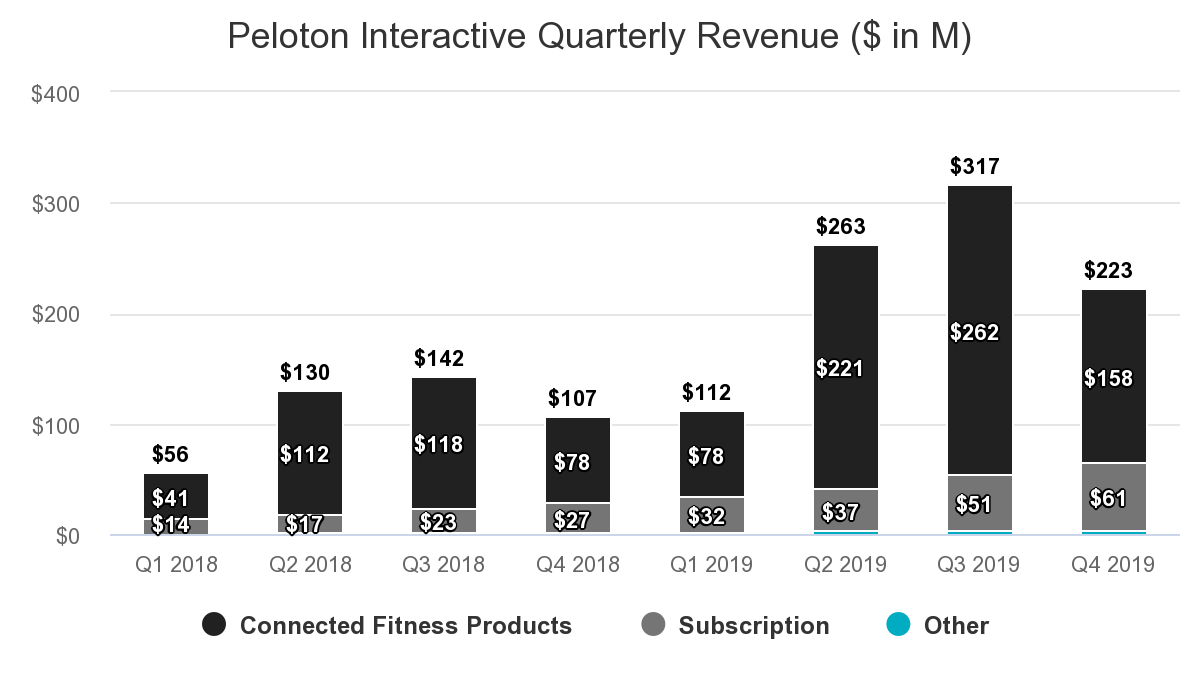 What kind of company is Peloton?

By its own admission, Peloton is a lot of things boiled down to one—namely, “happiness.” However, despite this self-characterization, Peloton is really a fast-growing consumer hardware company with a solid subscription business. Sales of Peloton’s “Connected Fitness Products,” meaning its bikes and treadmills, grew at an average quarter-over-quarter rate of 103% in FY 2019, reaching $719M. Peloton’s fitness equipment also comes with “Connected Fitness Subscriptions,” for which the company charges $39.00 per month. Additionally, for users who have not purchased a Peloton bike or treadmill, they can still enjoy the company’s digital fitness content for $19.49 per month. In total, “Subscription” revenue grew to $181M in FY 2019 at an average quarter-over-quarter rate of 125%. Peloton also generated almost $15M of “Other” revenue, for a grand total of $915M in FY 2019.

OK—so what’s it worth?

Good question. Seasoned consumer hardware investors have been burned a number of times by hardware companies that raised hundreds of millions in private capital, only to go bankrupt. Jawbone (raised $930M) and Juceiro (raised $100M) are the two highest profile examples. Even when public, hardware has struggled—companies like Fitbit and GoPro currently trade at only 0.5x Price-to-Revenue (P/S). Because Peloton is primarily a hardware business, we would expect it to trade at approximately 3x to 5x its revenue. Using the average P/S multiple of seven public hardware companies (~4.5x), Peloton’s $719M of “Connected Fitness Products” revenue implies a $3.2B valuation for the hardware side of the business.

However, Peloton also has a fast-growing, software subscription business, which investors will be evaluating closely. Using the median (17x) and mean (22x) P/S multiples of our public SaaS comparables set, Peloton’s $181M of FY 2019 “Subscription” revenue implies valuations of $3B and $4B, respectively, for the company’s recurring revenue stream. With Peloton’s implied hardware valuation, the company may be worth approximately $6.2B to $7.2B based on prevailing public multiples.

Does that valuation make sense?

Valuing a business based on public comparables is difficult for a number of reasons, including the lack of pure play comparables and volatile public market swings. In Peloton’s case, the subscription side of the business is not really a SaaS company, given the majority of its recurring revenue is tied to its hardware sales, and the company’s “software subscription” is really more like a Netflix content subscription than true Software-as-a-Service. As such, we expect most investors to continue viewing Peloton as a hardware play with a subscription revenue kicker.

In this way, Peloton is a bit like Apple, which became the largest company in the world on the back of its hardware products and now is focusing on building out its subscription content businesses. Using Apple’s current P/S multiple of 3.6x, Peloton’s implied valuation is only $3.3B, well below its last private valuation from last year. However, Apple only grew revenue by 16% in its last FY, well below Peloton’s 110% growth rate. Given Peloton’s growth, we expect its underwriters to pitch a significantly higher multiple—one closer to the illustrative $6.2B valuation we estimate above. As always, we'll wait for the public markets to have the final say.