The Dangers of the P/S Multiple

Catherine Klinchuch
Feb 15th, 2018
When we talk about startup valuations, we typically speak in term of P/S (price-to-sales) multiples. Why? For starters, many of them have not yet reached profitability, so valuing them off of earnings is impossible. Second, we often have very limited financial information for private companies, which makes more intricate valuation methodologies difficult. Finally, multiples turn a complex topic like corporate valuation into a seemingly simple equation. Consider Company A, an enterprise SaaS company with $100M in revenue. I observe a group of similar enterprise SaaS companies trading at an average of 6x sales. A multiples-based valuation would tell me Company A is worth $600M ($100M * 6).

Well, not so fast. When you dig deeper, the ostensible simplicity of multiples actually belies their considerable complexity. Even so, while multiples are often unavoidable for valuation analyses, their pitfalls are not. In our view, a thoughtful multiples-based valuation approach is very achievable, keeping in mind the following:

What is a multiple and a multiples-based valuation?

Put simply, a multiple is a way of expressing the value of an asset relative to some financial (or sometimes operating) metric. In my example above, revenue ($100M) is the financial metric. The multiple (6x) is an expression of the company’s value relative to sales, which would be $600M in this example. If sales instead were $200M, valuation would be $1.2B. The key in a multiples-based analysis is deriving the multiple. Typically, we base the multiple on observed valuations of companies similar to the one I am interested in (“comparables” or “comps” in industry parlance), either through public trading activity, M&A or private market funding rounds. For this reason, a multiples-based analysis is often called a comparables (or comp) analysis.

Put more complexly, a multiple is a shorthand version of a discounted cash flow analysis. A DCF—which financial theory generally posits as the correct way to value a company—states that a company’s value is the sum of its projected future cash flows. A diagram of the approach is provided below. 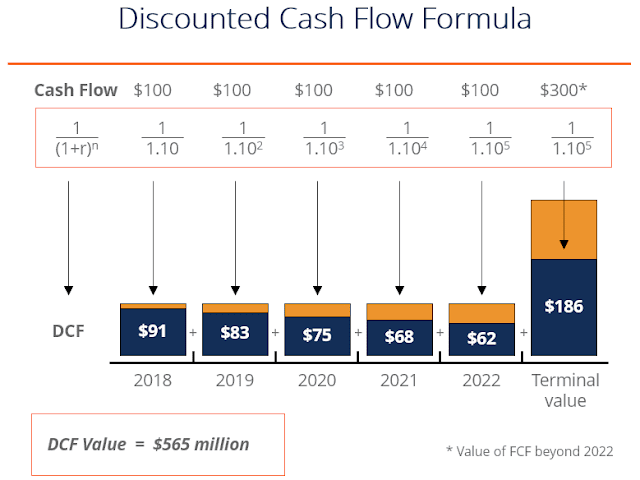 There are several steps involved in a DCF. First, we forecast a company’s cash flows out into the future. Then each future cash flow is adjusted by a rate that reflects both the time value of money (i.e. interest rates) and the riskiness of the investment. This is also called “discounting” the cash flows. Finally— adding yet more complexity—we also estimate a terminal value. What does that do? In theory, companies can last forever; yet, it's neither practical (nor possible) to explicitly forecast cash flows in perpetuity. The terminal value reflects the value of the company beyond the explicit cash flow forecast period.

At this point, it may be evident why people prefer multiple-based analyses. DCFs can be lengthy and complicated. Predicting cash flows one or two years out can often be difficult enough; how do you project out five or even ten years? What is the right discount rate to use? I won’t even go into the considerations necessary to ensure a proper terminal value.

This brings us to the second consideration from above

A proper multiples-based analysis can actually take the same amount of time (or longer…!) than a DCF. The key thing to realize is that multiples and DCFs are rooted in the same theory. A multiple simply takes all of the DCF components (future cash flow projections, discount rate, terminal value) and rolls it up into one number. There is mathematical proof for this; the other way to think about it is: both analyses are trying to get to the same place (the valuation), they just take different paths to get there. One path is obviously long and difficult. The other looks shorter, but you may get quickly and unexpectedly stuck in a bad situation...

It gets trickier for startup valuations…

P/S multiples, which are pervasive in valuing VC-backed companies, are arguably one of the most difficult to get right. Why? Compared to earnings or other income metrics, sales capture fewer elements that should drive differences in valuation—most notably margins. Take our two software companies again. Both have identical sales (say $100), but one has 90% margins while the other has 2% margins. The companies have wildly different earnings ($90 in one case, $2 in the other), but applying the average software P/S multiple to both would falsely yield the same valuation.

To get it right, a multiples-based analysis would adjust the valuation multiple for all of the intricacies that would drive higher or lower valuations for the company we were looking at. Some key factors include:

It’s not all bad news for multiples

Multiples, even if imperfect, can still be useful to make investment decisions if you keep their limitations in mind. Some considerations that we find helpful:


Stay tuned to our Blog and browse the Knowledge Center for more insight on all things finance, investing, and private markets!