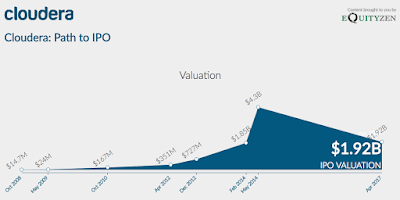 Phil Haslett
May 25th, 2017
The recent Cloudera IPO has re-ignited a discussion about down rounds. How could a private company possibly be valued at $30.92 per share in 2014, and then go public at $15? What could lead to such a corporate phenomenon? Do the valuation techniques of VC firms and Wall Street really differ by such a margin?

It turns out, down rounds are increasing in regularity, based on data analyzed by EquityZen and Irving Investors, a tech-focused hedge fund managed by Jeremy Abelson. But first…

…what is a down round?

Data shows an increase in down rounds, and a decrease in performance after IPO

Furthermore, down round companies have underperformed as public companies relative to their “up round” peers. Between 2014-2016, down round companies lost an average of 31% between their last private round and the 6-month mark after IPO. (Note: the 6-month mark is used because this is historically the first day private shareholders are free to sell their shares into the open market, which in itself may contribute to downward price pressure.) 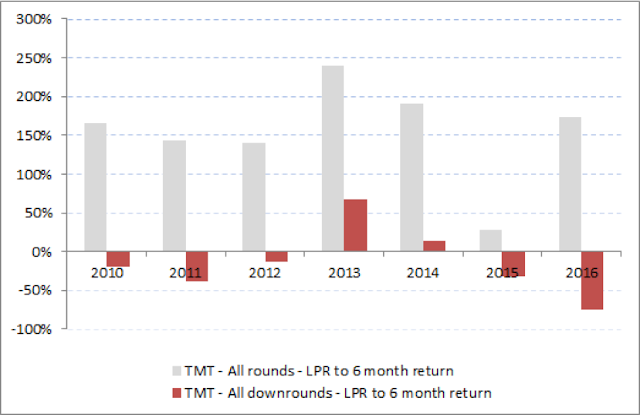 What this means for private secondary investors

Secondary transactions in pre-IPO technology companies have historically been completed at a discount to recent funding rounds. This is to reflect:


Based on the recent down round trend, private investors should also take into consideration that an IPO price will not always be higher than the company’s last private round price.

What this means for public investors

Public market investors purchase IPOs based on their own valuation at the time of IPO with minimal consideration of previous round valuations (unless there is a ratchet protecting previous employer downside or guaranteed return).   Still the trend in down rounds can be important for public market investors to consider, going forward.

It’s widely assumed that late stage private rounds attracted frothy valuations throughout 2013 – 2015 and while that investment strategy has since been corrected, it has led to an increased number of down rounds from companies with a 2013-2015 vintage pre-IPO round.

This does not explain why down round companies trade worse relative to their up-round cohorts. Public market investors don’t know or quickly forget if a stock IPO’d as a down round.

Therefore, there is more to the down round story than simply an overpriced round and a cyclical IPO/public market.  A down round IPO can also be the byproduct of lack of execution on projections, i.e. management’s inability to deliver on goals.  This type of underperformance is often sustained as a trend rather than corrected.  It is very telling of the future to inquire about historical projected performance vs actuals.  While public market investors are generally not privy to that information during an IPO roadshow, the data shows that a down round may be a good marker of a company’s ability to execute on projections.

About the authors:
Phil Haslett is the co-founder of EquityZen, a marketplace for pre-IPO secondary transactions.
Jeremy Abelson is the founder and portfolio manager of Irving Investors, a growth fund.
View more blog posts