But When Will They Go Public? A Profile of the Average Company at IPO

Russell Lange
Aug 13th, 2015
A company’s initial public offering is an exciting time for all parties involved; employees and founders bring their hard work to the public markets, financiers and investors unlock their years-long investments, and the curtain is finally lifted on the company’s detailed financials. While Initial Public Offerings (IPOs) were once the natural exit for tech companies after a few years of operations, the dynamic has changed towards longer tenures as private companies. EquityZen's Shri Bhashyam has previously covered why VC-backed companies are staying private longer: the abundance of capital (and high valuations) in private markets, the costs of becoming–and remaining–a public company, analyst scrutiny, and the rise of liquidity alternatives. As the timeline has extended, the question of when a company will go public and what that company looks like at the open has become increasingly relevant to pre-IPO investors and employees.

While all but the company's inner circle have any true insight into the answer to that question, we have attempted to profile what the “average” venture-backed company looks like at IPO. To do this, we crunched the numbers on 71 of the 214 venture-backed companies that have completed an IPO since 2013, excluding biotech, life sciences, and companies with a market capitalization below $50 million (many of which are shell companies for which sufficient data is not available). 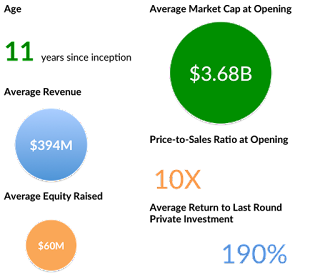 At the time of IPO, the average venture-backed company from our data set has been private for approximately 11 years, with 2003 as the average founding year – back when the Department of Homeland Security was less than a year old, Apple’s market cap was around $5 billion, and Facebook had yet to launch. At our average company's IPO, their most recent round of private fundraising was $63 million and the size of their public offering was approximately $190 million. (Omitted from these preceding figures: Alibaba’s monstrous $21.8 billion IPO, which is greater than the rest of the IPO values in our data set combined).

For those mindful of dilution, the shares offered represented 17% of the final count of shares outstanding, diluting the formerly private shareholders by about a fifth. The market cap of this average VC-backed company was $3.68 billion at the opening bell, with annual revenues of approximately $394 million, representing a hearty price-to-sales multiple approaching 10x.

So how have these companies been performing?

Returns to investors have come largely in the private market, as investors who gain access to these companies even in the final round of fundraising stand to see very solid gains. The total return for investors in the last private round to the IPO price was – on average – an outsized 190% (excluding Veeva's 266x return to the venture capital participants of their first and final fundraise). 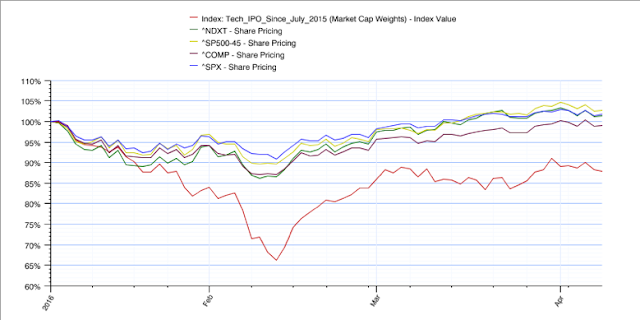 As of August 2015, 20% of the companies from our set are profitable, with a sky-high average price-to-earnings multiple of 162x; for reference, Google and Facebook's price-to-earnings multiples are 31x and 98x, respectively. The price-to-sales multiple for these VC-backed companies, however, has dropped from approximately 10x at IPO to 6.7x as of August 2015, as revenue growth of 43% has outpaced total stock price appreciation of 24%. As expected, the longer the company has remained public, the greater the valuation multiples have come down to earth, with companies completing an IPO in 2013 and 2015 currently at price-to-sales multiples of 5.23x and 7.45x, respectively.

With regards to stock performance, while the distribution is wide, on average public venture-backed companies are narrowly outperforming the S&P, returning 19% per year on average versus 18% for the S&P. In comparison, PowerShares QQQ, an index based on the Nasdaq-100, has returned 27% and the SPDR Technology ETF XLK has returned 18%, both on an annualized basis. The out-performance of QQQ versus the venture-backed IPO companies can be attributed to the fund selecting for the largest, strongest names in the space, and highlights the potential for young, high-growth, and largely unprofitable companies in the space to stumble early in their trading life-cycle, particularly as companies exit their lockup period. Venture-backed IPOs, however, did outperform the broader technology industry, albeit by a slim 1% margin. As companies that have had an IPO in the past 3 months have the potential to skew the averages significantly upward, (such as Fitbit's "annualized" 710% return since June), the average excludes companies with IPOs later than May 2015.

Departing from the average company for a moment to highlight some individuals, the top performers with regards to total return from IPO years of 2015, 2014, and 2013 to the present has been Fitbit with 107%, 2U with 184%, and Tableau with 230%, respectively.

So while we can’t tell you when a company will go public, when they’re over 11 years old, reporting fundraises in excess of $60 million, generating north of $300 million in revenue, and you catch their founders flipping through yacht catalogs, you may want to keep an eye on the news.

Data sourced from 71 venture-backed technology companies that executed an initial public offering from 2013 until June 2015. Data retrieved from company S-1’s, 10-k’s, and Nasdaq IPO data. Quoted revenue growth (43%) is not on an annualized basis, nor is the corresponding stock return of 24%. Past performance is not indicative of future returns, and this is not an investment recommendation. Links to outside sources do not constitute an approval or endorsement of the content on those websites.
View more blog posts